WHEN IT BECAME OBVIOUS THAT OUR FRIEND HAD SYMPTOMS OF DEMENTIA, there were very few things available to occupy her attention. Bernice was happiest when she was busy, but while her abilities were regressing, her perception and sensibilities were that of a mature woman. Though a fifty-piece jigsaw puzzle could be sufficiently challenging to be enjoyable, Bernice might object to the cartoonish picture that she found printed on a puzzle designed for a small child. 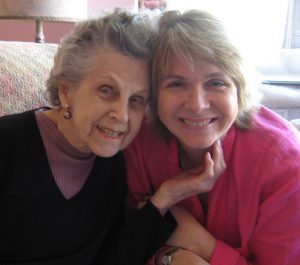 She was eventually diagnosed as having dementia, probably of the Alzheimer’s type. Bernice was in her nineties. It was 2003. She had outlived her family and and most of the people she had ever known. Holly was her closest friend, so we became her primary care-partners.

QUALITY OF LIFE IS PARAMOUNT

Our biggest concern was her quality of life, beginning with her immediate health and safety. But we also wanted her to enjoy the time she had left. Being with her in our new role as care providers convinced us that she could be happy despite the limitations imposed by the disease. You can see that in her picture here. When she was with us and busy she could be a delight. Left alone she would manifest most of the typical behavioral symptoms associated with dementia, including anxiety, anger, paranoia, depression, disinhibition and even aggression. She would often experience acute audio hallucinations.

Appropriate games and puzzles and books etc. are more readily available now, but there is still much to be done. Holly and John know that appropriate activity for those with dementia changes from stage to stage and from individual to individual.  They realize that to be effective, an activity must be challenging, but not so difficult that it is frustrating. Years of research, of trials and experimentation, led to the creation of Golden Care Products; a line of activities conceived and designed for adults with memory and cognitive disorders.